AlamgirKabir (Born in 1937) was one of the pioneers of film society movement and independent cinema in Bangladesh. To many filmmakers of later generations, he was the most revered mentor of cinema and a source of endless inspiration. He made several acclaimed feature films. He died in a tragic accident in 1989.

International Short and Independent Film Festival, organized by Bangladesh Short Film Forum, arrange a memorial lecture titled under the name of this eminent Bangladeshi filmmaker late Alamgirkabir,who was the chairman of the first edition of International Short & Independent Film Festival Committee in 1988. In every edition of the festival a renowned personality of cinema is invited to deliver a lecture, which focuses on the art, medium and trends of cinema which is prevailing around the world.

This year AlamgirKabir Memorial Lecture will be delivered by Mr. Kamal Swaroop, eminent filmmaker from India. 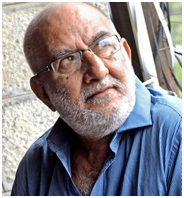 Kamal Swaroop is an Indian film, television and radio director and a screenwriter. He made documentary as well as feature films.

Swaroop was born in Kashmir. His father was a teacher and palmist, his mother a homemaker. The family moved to Ajmer in Rajasthan state, where he graduated in biology. He then moved to Pune in Maharashtra state to study film direction. He had a brief stint at the Indian Space Research Organisation, where he used Russian fairytales to teach science to kids. He then took filmmaking classes in a remote village in Maharashtra

In 1974 Swaroop graduated from the Film and Television Institute of India and even his student works met with unusual international acclaim. He continued with postgraduate studies at the Institute. He assisted the director Richard Attenborough in the filming of Gandhi (1982).